10 FAMOUS FOODS YOU MUST TRY IN THE PHILIPPINES

If you believed half the blogs about the Filipino cuisine, you’d think it was one of the worst places on earth for a foodie. But this is simply not the case!

We found many traditional yummy prizes to enjoy and with the exception of balut, here’s our 10 famous foods (and drinks!) we loved and think everyone must try when visiting the Philippines.

Chicken adobo is one of the most famous foods to try in the Philippines, known and loved by everyone. 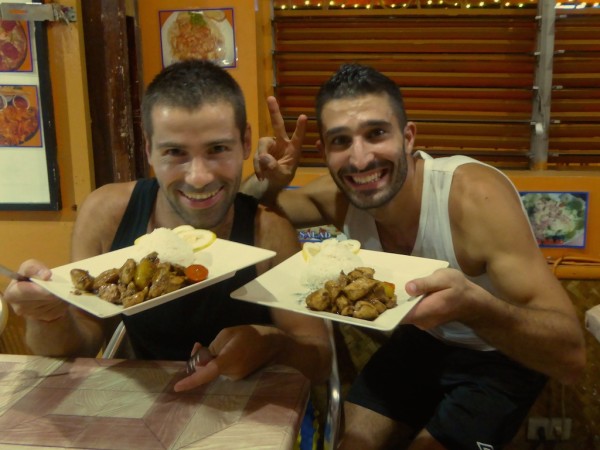 Adobo means “marinade” in Spanish and this is just that: chicken (or pork) marinated in a mixture of soya sauce and vinegar. Other ingredients are added depending on whose recipe you follow.

Our recipe for chicken adobo has been simplified to enable us to replicate it at home. Another recipe we tried was infused adobo with tea at the excellent restaurant: Station 7Tea8S  in Quezon City with our local friend Dennis.

Now THIS bad boy always raises eyebrows with every foreigner.

Balut is a developing duck embryo boiled and eaten as a snack in the shell and with a splash of vinegar. This is definitely one of the most famous foods to try in the Philippines (and probably the strangest). 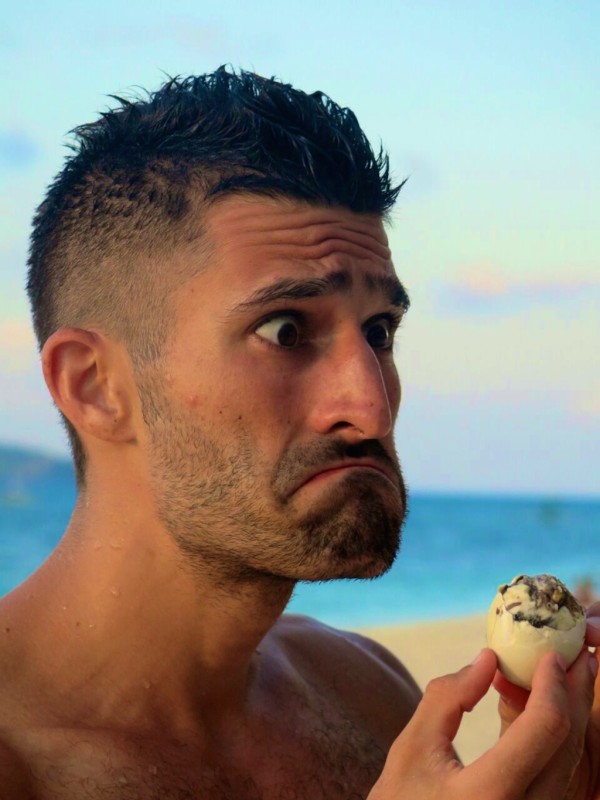 Balut is a popular street food, which originated in the Philippines and is also frequently found in Vietnam, Laos and Cambodia.

The ideal age of the duck embryo is 17 days, when the chick is not old enough to fully show its beak, feathers, claws and the bones are undeveloped.

Sebastien tried a 17 days old balut at Puka Beach on Boracay island and absolutely loved (!) it: 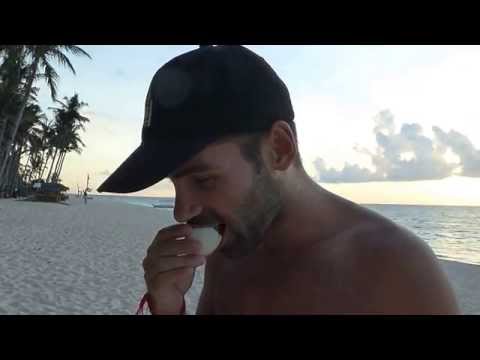 Kare kare is an oxtail and ox tripes stew with lots of vegetables, flavoured with ground roasted peanuts or peanut butter, onions and garlic. It is served with shrimp sauce (‘bagoong’), sometimes spiced with chill and sprinkled with calamansi juice (Filipino lime).

Kare Kare is famous throughout the whole country. The alleged origin of its name is from the word ‘curry’ due to the influence of the Indian community in Metro Manila’s Cainta, Rizal area.

This is seen as comfort food for Filipinos and also for Stefan: 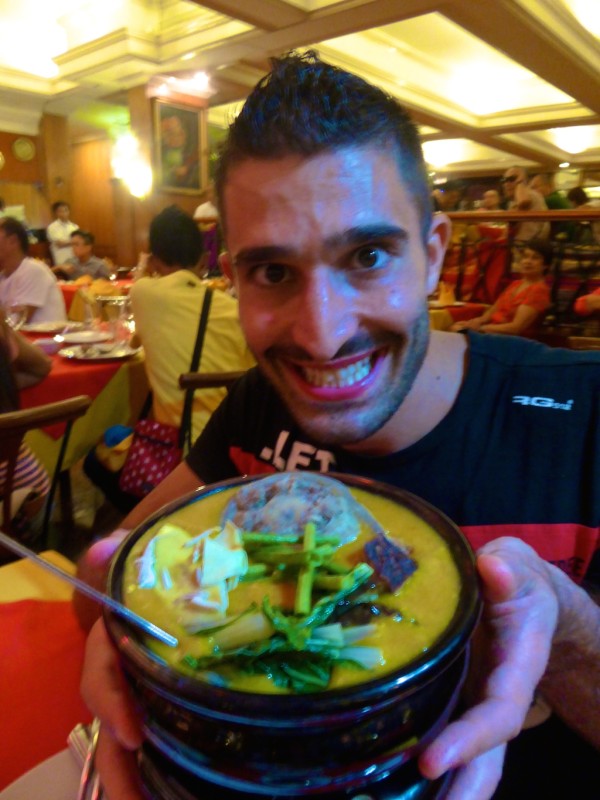 Stefan about to go face down into this kare kare

Kinilaw is similar to the famous Peruvian dish called ceviche. It is a raw fish salad served in an acidic juice, usually kalamansi (Filipino lime) and vinegar, which “cooks” the meat. Kinilaw comes from the word, “kilaw” which means, ‘eaten fresh’.

Other ingredients usually include garlic, ginger, onion, pepper and chilli. We had lots of kinilaw fun at the popular Los Indios Bravos restaurant in Boracay for Sebastien’s birthday: 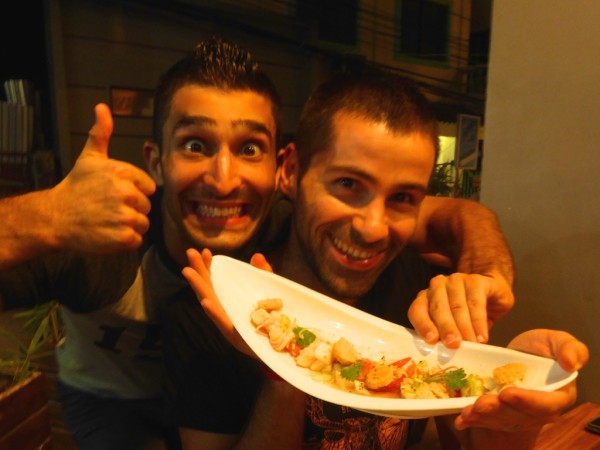 A kinilaw birthday treat for Sebastien on Boracay island

Sinigang is a meat based sour stew or soup with lots of vegetables. The most popular souring agent is tamarind (sampalok). Pork (baboy) is the most common meat used but chicken, beef and fish are also popular.

Alternative souring agents include guava, tomatoes or kalamansi (Filipino lime). We enjoyed this soup so much that our Filipina friend BC Lee was kind enough to give us her recipe for sinigang. 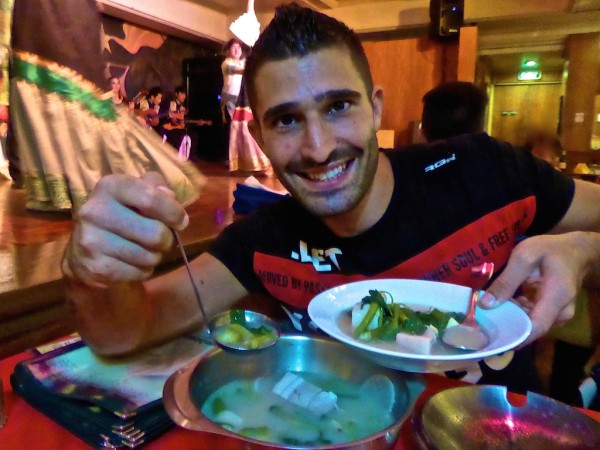 Lechon means ‘suckling pig’ in Spanish and is literally a whole pig roasted over charcoal for many hours for special occasions. This is considered the national dish of the Philippines and the city of Cebu is considered one of the most famous places to eat it.

The leftovers of the lechon are stewed with vinegar and spices and become a delicious dish called paksiw na lechon. Paksiw literally means: to cook and simmer with vinegar. 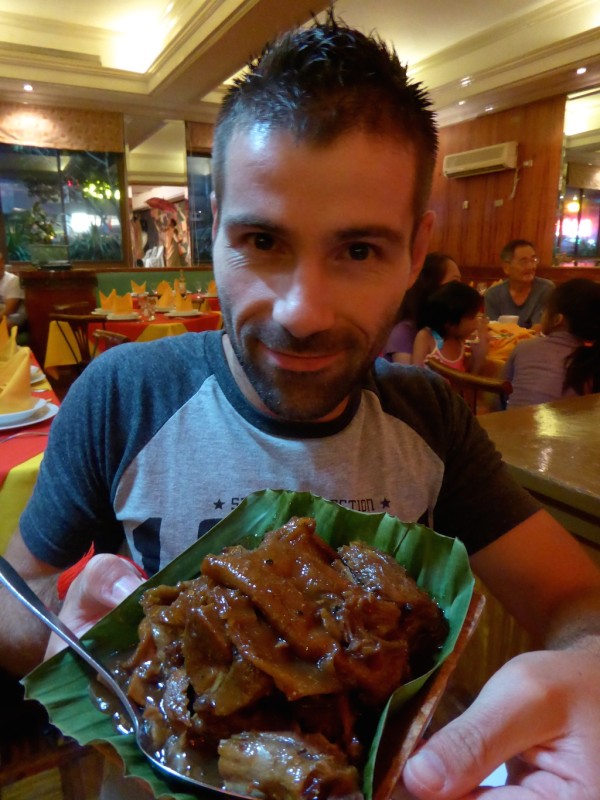 Taspsilog is a famous Filipino breakfast, which refers to the contents comprising the meal. In this case, cured beef (tapa), fried rice (sinangag) and a fried egg (itlog).

This is THE famous Filipino desert. Halo Halo (meaning ‘mixed together’ in Filipino) is served in a tall glass containing ice shavings, evaporated milk and various small chunks of yummy goodies all mixed in together.

The end result is a tropical, colourful and exciting mess: great for the beach! 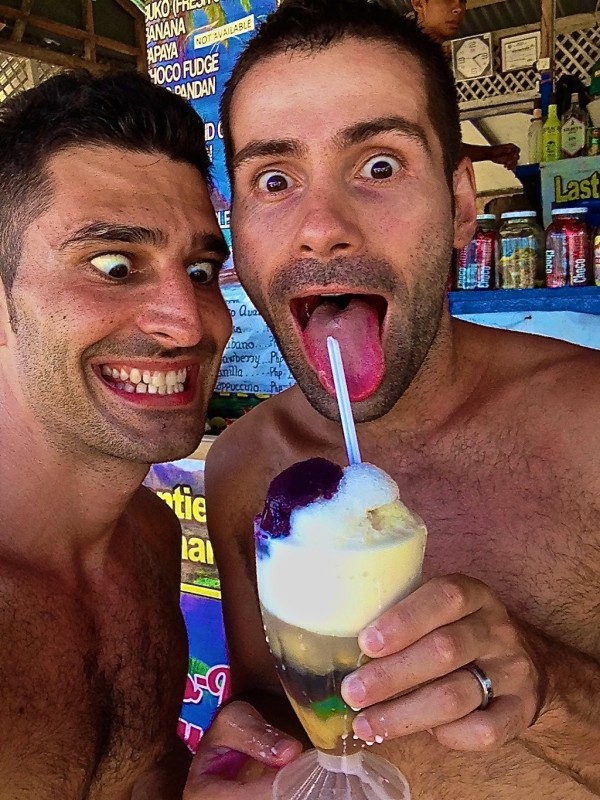 Two greedy boys about to fight over this halo halo

Buko is the word for coconut in the Filipino language (called Tagalog). No day in the Philippines was complete for us without the famous buko…first the juice then eating the yummy fleshy fruit inside.

We quickly became the Bucoholics of Boracay… 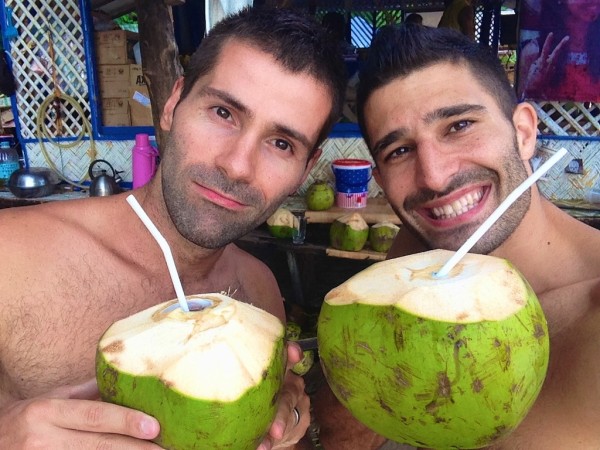 Stefan and Sebastien becoming the bukoholics of Boracay

The Philippines is the second largest producer of the world’s coconuts (after Indonesia) and the coconut tree called the ‘Tree of Life’.

The Filipinos make good use of the tree, other than the many uses of the fruit itself, you can also use it as wood fire, the leaves for thatching, the coconut husk to make ropes and many more. 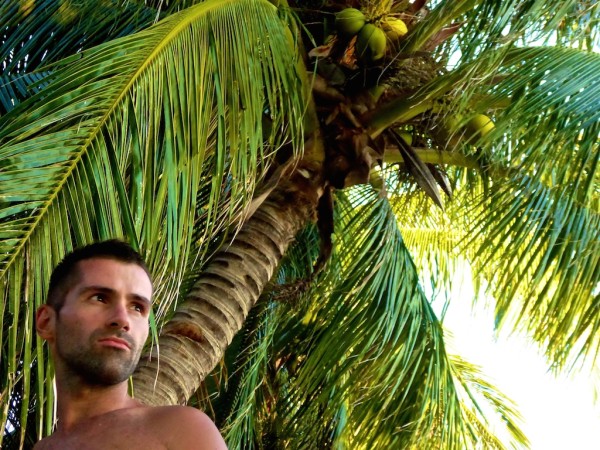 #10 Rum: the Filipino drink of choice

The Philippines is The big rum producer in Asia and is the Filipino’s spirit of choice. It’s made from sugar cane and usually cheaper than bottled water.

Tanduay rum has been around since 1854. It is so famous throughout Asia that it has become the world’s second most popular rum brand in the world after Bacardi.

Sebastien enjoying one of the many delights of the Philippines!

Travel with us as we swam our way through Boracay and Palawan in our Philippines travel video:

TOP PHILIPPINE MOUNTAINS THAT YOU NEED TO CLIMB

10 BEST PLACES TO VISIT IN THE PHILIPPINES

Prepare For Your Trip